This Master Chat interview is with Alex Karpovsky… which is kind of the most exciting thing ever. For the few who don’t know, Alex is a very accomplished filmmaker whose indie films include: The Hole Story, Red Flag, and Rubberneck. You also probably recognize him from Tiny Furniture and as Grumpy’s manager (and “Crack Spirit Guide”) Ray from the HBO hit show Girls. In this interview, Alex teaches you that you don’t need millions of dollars or big executives to make interesting and honest films. You just need enthusiasm, a compelling story, and a camera.

MC: When did you first realize that you wanted to go into the film business?

AK: It came to me pretty late; it was never really my first, second, or even third intention. I went to grad school and I started doing a little theater and sketch comedy there. Then I dropped out of grad school and moved to New York where I did monologues and stand-up comedy. I started editing karaoke videos, infomercials, and corporate videos. I didn’t go to film school, so that was kind of like my mini film school.

After I did that for a few years, I made my first film, The Hole Story, in my mid-twenties and I put myself in that movie. I just wanted the chance to be a writer and director; I didn’t have that much interest in being an actor (even though I put myself in my own movie) but for some reason a lot of acting roles opened up– along with directing doors.

How (if at all) did studying ethnography at Oxford influence your career?

I’m not really sure. I think, this might be a stretch, in ethnography they teach people to analyze people, groups, communication patterns, rituals, all in a very quantitative sense, kind of breaking things down into elementary parts that can be assessed and analyzed.

Sometimes I think that when I’m looking at a role or writing a role it helps to break it down into elementary parts to see them with more clarity. That may be true or may not– I’m not sure.

Who and what has inspired and influenced your filmmaking style?

I think a lot of people have influenced my filmmaking style. When I dropped out of grad school I was obsessed with Andy Kaufman. When I did comedic performance or stand up comedy he was sort of the “guiding light.” I was also really influenced at that time by Spalding Gray and his monologues. But in the film world, I really liked a lot of Woody Allen films, as well as the Coen brothers’ work. Then I saw a film by Ross McElwee called Sherman’s March, which had a huge effect on me as well.

When did the idea for your first film, The Hole Story, come to you? 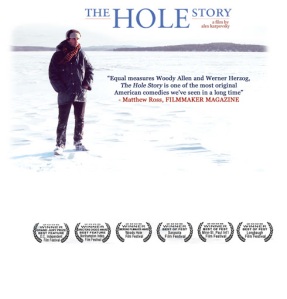 haracter and injecting them into a real world situation. So, that was something that I was really interested in– blurring the lines between fiction and reality. Then I heard about this strange phenomenon in northern Minnesota about this very mysterious lake that doesn’t freeze over in the winter despite the fact that all the other lakes in that area are covered in four feet of ice and snow. The town was making it a tourist attraction and I thought that was charming, pathetic, and a beautiful stage to inject a fictitious storyline. So, when I heard about it, that was sort of the launching pad.

Film wise, how long does it typically take from concept to finished product to getting your film released?

My first movie took a long time because I didn’t really know what I was doing. Because I hadn’t gone to film school or made any short films it took about two and a half years from start to finish, which is a pretty long time. It depends. It depends on how much improvisation you have, or how much money you have for reshoots, as well as how much patience you have for the whole endeavor. But generally speaking, my turn around is getting faster and faster which I think is a good thing.

Was it daunting to be in charge of a whole film for the first time?

I didn’t feel daunted because it was such a small-scale film and low budget production. Four or five of us went out to Minnesota from New York. And we had low end, cheap, video cameras and not a lot of lights so it didn’t feel that daunting. But there’s a certain responsibility that goes along with it that definitely kept me focused and enthused.

What are the challenges with acting and directing at the same time?

I think the biggest challenge for me is to be present and engaged within a scene while taking notes on what’s working or not working. That can be really difficult and sometimes I feel like I need to watch playback or have lengthy conversations with other people to really pull it off.

The really talented people that star in their own projects can multitask in a really fundamental sense. Lena Dunham, who does Girls, she’s really a master of being totally present and aware in a scene, and really loses herself in the scene, and then can guide all of us, but simultaneously she’s also taking notes technically and performance wise on what’s working and what’s not. So, as soon as she yells “cut,” not only did she give a really great performance but also she’s able to give really coherent and specific notes to make the scene even better.

Speaking of Lena Dunham, you guys have worked on a couple of things together, so were you offered the part of Ray in Girls or did you have to audition?

I was offered it. She asked me if I wanted to be a part of this new HBO show and I of course said yes. That was based on our friendship, I think. She asked Jemima Kirke and me; she brought us over from the film she did called Tiny Furniture.

Ray is definitely a complicated person. What do you think made him that way?

One of the great things about TV is that you can spend a lot of time with the characters and you don’t need to figure everything out at the beginning. Unlike film, it’s a more organic relationship with the audience: there’s feedback and discussion and you’re woven into a narrative discourse with the culture and then you can adapt and respond to it. It’s really fun to do; I’ve never done any TV before the show.

In season one, Ray was full of one-liners and judgment and anger and cynicism and we didn’t exactly know why he’s this way. In season two, we really got to take a peak under the hood of the car and examine him. It was really fun for me to do as an actor, to explore these underpinnings. I feel like it gave him a lot more dimension, texture, or to use your word, complexity.

Do you watch the show?

I do. I watch it a day or two after it airs, and I usually just watch it once and that’s it.

Does that help you when you go back for the next season?

I think it does, I think it’s a nice reminder. We shoot the show in the summer and it airs six, seven, eight, nine months later. I don’t have the greatest memory in the world, so I sort of forget what we shot and how they edited together.

How do you think your writing and directing background has helped your acting on the show?

I don’t know if it has really. After directing a certain amount of movies you learn how to relate to actors and see things from their point of view. I think it’s really healthy to go out and direct something so they see just how stressful it is and all the burdens that director’s carry. I also think it’s good for a director to act in at least one thing so they know the vulnerability that an actor must endure. So, I think just understanding the perspective is really healthy.

You said that Coen brothers’ movies were an influence of yours, and you were just in one of their films. What did you learn from being on that set?

It’s really interesting to watch directors you really like work with the crew. I think they deliver their notes in a way that’s very accessible and it’s very easy for the actors to understand what they mean.

I feel like it’s very important for a director’s notes to be short, concise and accessible for the actors to really understand what’s going on.

Also, these guys have made so many movies and they’ve created a very specific sensibility. You can probably tell that you’re watching a Coen brother’s film five or six minutes in. And because most of the actors that work with them are so familiar with their work, I feel like they don’t need that much direction. We’ve already seen thirty of their films, which is already plenty of direction.

What other projects are you working on?

We just started the new season of Girls last week and we’re going to be shooting that for a few months. I’m also writing a few projects that I would like to make.

What advice do you have for aspiring filmmakers and actors?

My advice would be to go out and make stuff. I think it’s easier and easier to go out without having to rely on external powers or executives, with the new cameras coming out that are more and more affordable, and the quality is better and better, and with sites like Kickstarter. So, if you genuinely want to make a movie, you’re excited and have a passion to express a very personal story, you’re running out of excuses. Everything is in front of you. It’s a very exciting time to be a young filmmaker. So, take advantage of this beautiful opportunity you’re in. ♦