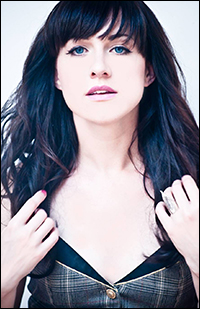 I am very excited for you all to read this interview with Lena Hall! Not only was it super fun to talk to her, but her answers were incredibly honest, funny, witty, and insightful. Lena booked her first show, Cats, right out of high school and has gone on to do many other shows on and off Broadway. Now she is currently starring in Broadway’s hottest new show, Kinky Boots, where she can be seen fiercely singing Cyndi Lauper’s tunes and speaking Harvey Fierstein’s dialogue every night. “Everybody Say Yeah” because Lena is living one BOOTiful Broadway life!

CC: I didn’t really have a choice. My parents were ballet dancers, my dad was a chorographer, and basically the minute I was born they threw me on stage [Lena Laughs]. From birth I was bred to be a performer… no matter what.

What training did you do while growing up to prepare you for Broadway?

Well, originally I was supposed to be a prima ballerina. When I was little, I was a little phenomenon: I was a soloist in a children’s company and I went to France to study ballet on full scholarship. Then when I was twelve, I saw my sister in 42nd Street performing with The Young People’s Teen Musical Theatre Company in San Francisco and when I saw her on stage, I was just like, “I want to do that!” [Lena Laughs]

That was usually how it was, whatever my sister did, I wanted to do, but seeing her in 42nd Street really meant a lot to me. I loved everything about it. So, I told my parents that I wanted to quit ballet at the age of twelve, and they didn’t let me stop but I joined the company that my sister was in and I did shows from when I was twelve to about seventeen.

Also, I went to an arts high school where I was in the dance and vocal program.

You made your Broadway debut in Cats at 18. How did that job come about? How soon after you moved to NYC did you book it?

I went on tour first, around my eighteenth birthday and stayed on tour for about a year and two months until they offered me the role of Demeter on Broadway and then moved right to New York with that.

You were on the MTV show Legally Blonde the Musical: The Search for Elle Woods. What was that experience like? Did you feel like you were constantly in an audition?

You know, that whole thing was not an audition AT ALL; it was just a performance really. You had to be “on” all the time. As much as I had wanted it to be an audition process, it was not that at all, and I kind of fought against what was going on and I shouldn’t have. I should have just gone with the flow a little bit better. Remember if there are cameras in there, put some make-up on [Lena laughs]… because it’s going to be shown on TV!

That was just a crazy, crazy process because I didn’t know the show as well as some of the other girls. Some of the others knew the show backwards and forwards… and I didn’t. We would have to memorize the scene, the song, or the choreography, and the blocking all the night before. And if there’s one thing I’m not the greatest at, it’s being able to memorize words quickly, so that was a little bit of a struggle for me.

Currently you’re starring in Kinky Boots! How early on in the creative process did you become attached to the show?

Annaleigh [Ashford] and I are pretty lucky because we were asked about two and a half years ago. The piece was being developed for a little while; there was only one other Nicola (which is the character I play) and one other Lauren (which is the character Annaleigh plays) so Annaleigh and I were lucky they kept us for pretty much the whole entire process. Because we weren’t contractually locked into the show until the out of town tryout in Chicago, they were open to recast at any time, so it feels totally awesome that they kept me [Lena Laughs].

How has the show changed a lot since it’s out of town run in Chicago?

Chicago was interesting; we did a lot of work in Chicago. There were a lot of changes… unfortunately for my part. My part used to be a lot bigger but they wanted to get to the drag queen faster and that meant cutting down a lot of my storyline.

It was hard for me because the part that I had developed for so long essentially got nipped all the way down and that was really unfortunate. But at the end of the day, it’s not my story. I’m their supporting character so, whatever they felt they needed, I was fine with… it was just hard.

How does that affect the way you play the character? Do you have to alter you approach to the character because the audience isn’t seeing as much?

You can’t worry about the audience, really. You have to just tell the story that’s given to you. Since I know a lot of the back-story, I have my own dialogue off stage. I try to keep it as truthful to the scene as possible and not worry what the audience feels about me. You have to play the part and own it, and whatever people get from it, they get from it.

You guys just opened last week. While you were in previews how did you remember all the changes being made? When was the show frozen?

For this go around here on Broadway, it was actually really easy. Because we had done so much in Chicago, they didn’t make a ton of changes. The changes that they made for Broadway were really just scenic changes (meaning dialogue) but my stuff was pretty much set. The biggest thing that we cut was a magic trick and a song to tell the story a little better. It was a little hard but it was a good change and everyone’s a professional so it wasn’t a crazy mind fuck or anything.

We froze the show pretty early on, about a week and half before we opened, which was a lot of time.

Can you walk us through what opening night is like?

On opening night I was scared out of my mind! [Lena Laughs] I woke up and I didn’t say a word to my boyfriend. I left early to go buy a purse and some jewelry. Then I stopped off at 42nd Street/Times Square, which has a huge ad campaign up, and I’m on one of the letters, so I wanted to look at it and see if someone had drawn on my face yet [Lena Laughs]. I guess I just wanted to center myself and remind myself what was going on… I was in shock basically. When I went to the theater to pass out my opening night cards, there was a bouquet of roses sitting on my station and I started sobbing because I was so excited. Then I passed out my cards and my hair person, Richard, gave me a present and I started sobbing again! [Lena Laughs] I was a total mess!

Then around 5:00 I ran out to go get my dress, which was being made for me by the costume supervisor of at Annie and my dress wasn’t finished yet. So, I was a little stressed out. I don’t remember a lot because I was so emotional! The Gypsy Robe ceremony was magical. I’ve had opening nights on Broadway before but this one was so special. Everything about the show, from start to finish, has just been one big love fest!
Have you learned a lot from working with Harvey Fierstein and Cyndi Lauper?

They are two of the craziest characters I’ve ever met, so the two of them in a room together is a blast! Harvey Firestein is lovey-dovey and like my grandmother, always welcoming me into his arms for a big hug and a kiss. He calls me names sometimes. For example, once I had bought Creme de la Mer for my skin and he walked over and was like, “Aw here’s my greasy-faced bitch!”

He is so fun, and so great, and so open too. He would come up to me and say, you know I’m thinking about changing this line from “this” to “this,” what do you think?

But Cyn is a little different. At first, if you don’t know what to expect, you would think she is really harsh or passive aggressive, I guess. But really, when you understand her a little better, you realize just there trying to help you get the essence of her music. You realize that her notes come from deep within her heart. She’s always well meaning… she’s a great woman.

Who are the top three people you would love to work with in the future?

I’d love to work with Gavin Creel again in more of a “duo” way, a legend like Patti Lupone or Bernadette Peters, and for the rocker in me, Steven Tyler!

You had the opportunity to be “miscast” in any role what would you want it to be?

I love this question! It would be Elle Woods [Lena Laughs]!

Well, that’s not that far off! I mean you almost…

What advice do you have for aspiring Broadway performers?