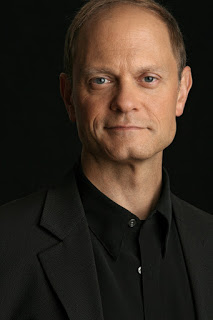 For years now, David Hyde Pierce has displayed his limitless talents to the world. Whether he’s on the stage or in a sitcom, he knows exactly how to play it and has the accolades to prove it. You can see him now back on Broadway starring as Vanya in Vanya and Sonia and Masha and Spike giving yet another top-notch performance.

When did you catch the theater bug?

Two things happened that I think kindled my love of theatre. First, when I was seven they built a big performing arts center in my hometown, and my mom and dad would take me to concerts there. The New York City Ballet performed there in the summer, and I saw them do the George Balanchine version of Midsummer Night’s Dream. The Mendelssohn music really hit me, and at the end of the piece this great dancer Arthur Mitchell who played Puck, had a solo dance, the equivalent of Puck’s closing speech in the play. As the music faded on the final chords, he bowed to the audience, and then he floated up into the air as the curtain fell. I was thunderstruck; it was my first experience of the magic that can happen on stage.

Second, when I was in fourth grade I found a collection of Shakespeare’s plays in our school library. I read Julius Caesarand couldn’t believe how cool Caesar’s death scene was, so I made my classmates perform it with me for the class. I got to be Caesar.

Oh and one more thing. I was very active in my church, and though I was very religious as a kid, I also think I loved the theatricality of the services and the music and the vestments and the incense.

In college you initially majored in classical piano but then switched to a double major of Theater Arts and English. What made you choose those two subjects to study simultaneously?

What training did Yale University provide you to help set you up with a very successful career?

I got two very different kinds of training at Yale, both really valuable. First was a broad, philosophical course taught by the head of the department, Bart Teush. We read and studied literary criticism, poetry, lots of stuff that was far removed from the usual reading of plays and acting scenes. Sort of a liberal arts approach to what theatre means. And then we had scene study work with actual living breathing New York theatre people: Lynne Meadow, who ran and still runs Manhattan Theatre Club; actor, director and teacher Austin Pendleton; and the founder of the Williamstown Theatre Festival, Nikos Psacharapoulos, a man who had a deep instinctive understanding of Chekhov and Tennessee Williams. They all taught scene study, not focusing on technique, but on intention, on grounded reality, and they were also a connection to the professional world of New York.

It is no secret that one of your most acclaimed roles is Niles Crane in Frasier. How did you apply your knowledge of performing in live theater to acting on a sitcom in front of a live studio audience?

I was lucky to be with a great group of mostly theatre-trained actors, doing scripts that were written like plays, and like you said we were filming in front of a live audience, so I felt right at home. The cool thing was that I felt so at home I didn’t worry about the cameras, and that really helped me to be comfortable in front of the camera in film work.

What was it like to play the same character for eleven years? Did it make playing other characters more difficult or more enjoyable?

It made getting to play other characters more difficult, but that was a small price to pay. I loved the character and the people I was working with, the writing kept me interested (and kept the character interesting) the whole run, and when we were finished, we all wished we could go on just a little longer, which is how I like any run to end.

One of your first jobs back on Broadway after Frasier was the critically acclaimed Spamalot. How did you throw yourself into a role/production that was so different from what you were used to? I mean, you went from playing a “Type A” therapist on a sitcom to a knight in a slapstick musical!

Well, this goes back to your previous question about playing Niles for so long. I’d been acting in theatre for about twelve years before I started doing television, including some fairly broad and slapstick stuff, so Spamalot felt like coming home (plus I was a huge Monty Python fan). Spamalot was the perfect next gig for me after Frasier, because since it was a comedy it wasn’t asking people to suddenly accept me as a dramatic actor, but since the style of the piece and the different characters I got to play were so far from the tv show, I could brake out of the Niles mold. And although I never have been very good about “planning” my career, one plan I had made a few years before was that when Frasier ended I wanted to do a Broadway musical, because that was something I’d never done. During the last years of Frasier I was taking voice and dance lessons so I’d be as ready as possible when the time came.

Then came Curtains (the show you won a Tony Award for). Was there ever a point in your life where you could relate to Lt. Frank Cioffi’s infatuation with musical theater and show biz?

The character I played was a detective who had a secret love of musicals, and when he got to spend time with the people who have devoted their lives to making musicals, he was in heaven. No I didn’t have a secret love of musicals, I just thought, given my music training, it made sense for me to try to be in one. But with Spamalot I got to see what that world was like, how it was related to but completely different from the theatrical world I’d known. I was and still am in awe of the level of dedication, professionalism, technique, bravado, insanity and love that lives in musical theatre, and of course the level of musicianship. That continued with Curtains, I was head over heels in love with everyone and everything about the experience, even the physical therapy. Like Lt. Cioffi, I was in heaven.

Vanya and Sonia and Masha and Spike is inspired by Chekhov’s work. How did Chekhov’s original plays inform and help you prepare to play Vanya in Christopher Durang’s play?

I had been in The Seagull at the Guthrie Theatre in Minneapolis, and The Cherry Orchard in a production directed by Peter Brook, as well as working on the plays in college and rereading them on my own to prepare for Vanya, Sonia. All that past experience helped me understand how Chekhov’s writing and characters work, and to see how Chris Durang has filtered that through his own odd prism. Plus I think Chekhov done right is both real and absurd, which was really helpful because I think the same thing applies for Chris’s work.

Are you currently making changes from the Lincoln Center production in rehearsals?

When we were at Lincoln Center we were performing on a thrust stage, with audience on three sides, so we’ll be adjusting the staging and the playing to the proscenium stage at the Golden. Fortunately, when we started working on the play at the McCarter Theatre in Princeton, that was a proscenium stage, so mostly we’ll be going back to our original staging. Also, I plan to either talk louder or softer.

Now that you have achieved so much in your career, do you have certain criteria for choosing what you work on? If so, what?

It has to move me. Sometimes that means emotionally, it has to touch me or make me laugh or both. Or it moves me technically or intellectually, makes me learn something new about myself or the world. Or it moves me literally, like going to do a play in London.

What advice do you have for aspiring “show people” who wish to achieve the success that you have?

What’s something valuable you learned early on in your career that you still live by today?

If they’re not laughing, do less. ♦