I’m excited to say that this week’s interview is with the extremely talented Seth Numrich. At sixteen, Seth was the youngest person to ever be admitted to Juilliard’s drama department. Now at twenty-five, he has a multitude of TV and film credits and has also starred in three Broadway shows: The Merchant of Venice, War Horse, and Golden Boy. Seth has already accomplished so much. Read up because Seth and his great performances will be around for a while!

SN: My dad is an actor, director, playwright and storyteller in Minnesota (where I grew up), so I’ve always been around theatre and had a deep appreciation for it.  The moment that I really knew I wanted to be an actor was when I did my first professional role in Tennessee Williams’ Summer and Smoke at the Guthrie Theatre when I was 12 years old.  I probably didn’t totally understand the play but I fell in love with it, and I looked around at all of the amazing actors I was working with and decided that was what I wanted to do.

At sixteen you were the youngest person to ever be admitted to Juilliard’s drama department. Did you feel a lot of pressure entering your first year at one of the world’s most highly regarded theater schools?

I think I probably put more pressure on myself than anyone else put on me. I felt like I needed to prove that they hadn’t made a mistake by accepting me, so I spent a lot of time for the first few years trying really hard to “be good” and to “get it right.” It took me a long time that there is no such thing as “getting it right” with acting.  It’s usually better to get it wrong; you learn more that way.

Can you talk a bit about your time at Juilliard and all the valuable things you learned there?

I had a wonderful and challenging time there. The teachers are incredible and they work hard to offer you as many experiences as possible that relate to the craft of acting.  I had the opportunity to work with amazing actors in my class, and with amazing playwrights and directors. My training there has been so valuable to me and I will always feel grateful that I was able to study acting in that way. I also had the great fortune of getting involved with outreach work while I was in school there. Juilliard has a wonderful culture of volunteer opportunities.  Through the school I got to perform all over the city in nursing homes, hospitals, prisons, etc.  I got to travel to New Orleans after Hurricane Katrina to work on houses that had been flooded and offer performances for the community there. I got to work in south Florida, offering arts education to kids who might otherwise be joining gangs or getting in trouble. Those experiences really opened my horizons of what “Art” means to me, and the power it can have.  I have continued to do volunteer work through an organization that sprung out of some of the work that we did at Juilliard, called Artists Striving To End Poverty, or ASTEP. We always need support and volunteers!

Soon after you graduated you made your Broadway debut as Lorenzo in The Merchant of Venice. How did it feel to be thrusted into your first Broadway show so quickly?

I did spend a few years working primarily Off-Broadway and doing regional theatre after I graduated (as well as being a waiter). I got to do a lot of amazing stuff and work with great people.  Getting cast on Broadway was obviously a huge moment for me, and I was thrilled to be a part of that production of Merchant.  I was happy that Lorenzo was my first role on Broadway because it’s a great role but a supporting one rather than the real focus of the play.  I got to spend a lot of time observing and learning from other incredible actors before having the chance to step into a more central role in War Horse.

Then came War Horse. What was the rehearsal process like for such a dynamic show?

Rehearsals for War Horse were so much fun and so much work.  Tom Morris and Marianne Elliot (our directors) did an amazing job of setting a tone in the rehearsal room that was all about respect, collaboration and support. They had had such huge success with the show in London, and it would have been easy for them to just sit back and “re-mount” the production they had done there, but they didn’t. They made it feel like we were discovering the play for the very first time and creating it from the ground up. We did in fact make some significant changes to the script during our process, and they really wanted to keep working on the show and making it better.  We all felt like we were part of the creative process of the piece, which then made it even more fun and rewarding to perform the play every night.

Did you find that you had to play to the Vivian Beaumont Theater in a specific way, as it is almost a theater in the round?

The Beaumont is one of my favorite stages in the world, and ever since I first saw a play there it had been a dream to get to act on it. Working on a thrust stage presents certain challenges, but it also gives you a proximity to the audience that is usually impossible on a proscenium stage.  It allows for intimate moments, even in a huge show like War Horse.  I loved being on that stage.

And now you’re in another Lincoln Center show, Golden Boy! How did the job come about; did Lincoln Center ask you to be a part of it or did it come through your agent?

Because I had worked on War Horse, I had a good relationship with the amazing Daniel Swee and Camille Hicks who are the casting directors for LCT.  They thought of me for the role, and went through my agents to have me come in for an audition.  I had never worked with our director Bartlett Sher before, so I came in to audition for him, and then had a callback later on with him and Andre Bishop (artistic director of LCT).  It was one of the best audition experiences I’ve ever had; Lincoln Center has such respect for actors and they really try to make it possible for us to do our work in an audition. That’s one of the many things I love about them.

Once you got the part of Joe Bonaparte, what work did you do to develop your character, boxing, violin playing, and all?

I started learning about boxing as soon as possible, taking lessons with trainers at several different boxing gyms.  I also started digging into the play, and reading and watching as much material as I could that I thought might help.  I also started listening to a lot of classical music (particularly violin pieces), and I asked my friend Katy Pfaffl who played the Song Woman to give me some tips and lessons on how to handle the violin, and how to make it look like I might know how to play it.

I read that you do a lot of boxing warm ups before the show. What else do you do to get ready for the show and how do you make sure to not tire yourself out?

Doing some boxing work before the show became a great way for me to warm up.  It’s nice to have something really physically challenging to do before going onstage to give me a chance to get out of my head. I have a tendency to overthink things, which can be as dangerous onstage as it is in a boxing ring.  If you’re living in your head instead of in the moment you’re going to find yourself in trouble.  Boxing is hard work so I had to make sure not to get too exhausted before the show, since the show was a workout itself!  I also liked to listen to music to prepare for becoming Joe; before act one I would listen to classical violin music (mostly Beethoven), and before act two I always put on Jay-Z.

I also read you performed in Golden Boy while you were at Juilliard. How has your perspective of the show changed?

When I was in school we worked on Golden Boy as a rehearsal project during my second year.  I was assigned the role of Eddie Fuseli, the gangster. I was way too young to play the role, and when we started rehearsals for this production and I started watching Anthony Crivello embody the role, I realized how terrible I must have been! But that was when I first became aware of this play and of Clifford Odets, and I really fell in love.  I hope I get to work on more of his plays in the future. 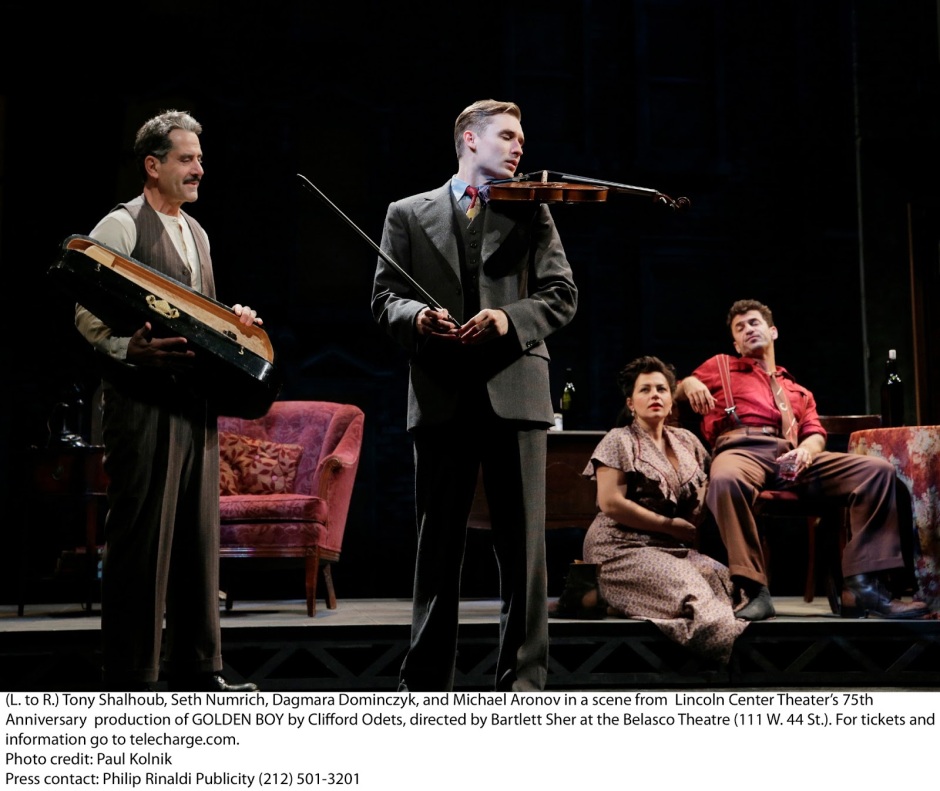 What has been the best part of achieving your goals at a young age and so quickly?

I feel very fortunate to have had the opportunities that I’ve had so far in my career, and I hope that I keep having the chance to do work that I believe in and that challenges me.  My artistic goals since I started acting have always been about trying to do good work.  I feel like I’m still at the beginning of my artistic journey and I’m still learning and developing, so hopefully I can always keep striving to be more honest and more truthful as an actor.  Of course, I have other goals like being able to make a living and have a family someday, which aren’t always easy things to do when you’re an actor.  I’m lucky to have started out my career with amazing opportunities, and I hope that I can keep doing good work and being a good person.

Work hard! If it’s something you love and feel passionate about, keep at it. It’s not an easy life and it takes a lot of work and dedication, but if you’ve got that to give then there is a place in the theatre for you.  And also I would say: live life. As I get older I realize that the more experiences I have as a person the more I have to draw from as an actor. ♦