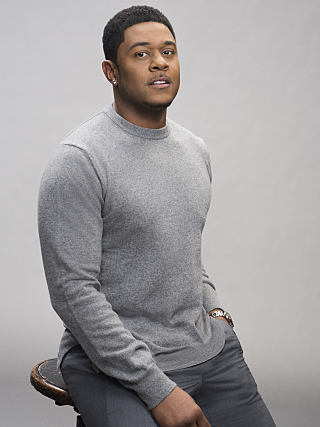 Boxing and acting are more similar than you think.  Take Pooch Hall’s word for it. The Ray Donovan star grew up as a fighter. In the ring he learned discipline, focus, and how to roll with the punches. As Hall can attest, all three qualities are necessary to succeed as an actor. On the SHOWTIME hit, Hall plays Daryll, the illegitimate son of Mickey Donovan (Jon Voight) and half-brother of Ray (Liev Schreiber).  As Daryll, Hall’s skill and technique shines on screen in scene after scene. His performance in the season five finale of Ray Donovan (airing this Sunday night) is no exception. The show was recently renewed too, so not to worry, we have at least 12 more episodes to look forward to in the future. In this interview, learn how Hall’s background as a boxer helps him day-to-day working on one of television’s best shows.

When did you catch the acting bug?

Probably as a kid. I’ve always been a character. I actually see myself in my kids. All my kids have a piece of me. I’m like, “Wow I was just like that.” From an early age I was an entertainer. My dad would always say that I was special. I never really understood what he meant. I never was a stranger to the crowds. I was a boxer at a really young age. One thing my father taught me was how to fight. He was a boxer in the army. He taught me how to box and I was in front of big crowds from age seven or eight. I always felt like I was born to [perform].

As different as boxing is to acting, there are certainly similarities: the discipline you need and how you have to throw your whole body into what you’re doing. How has your boxing background helped you in your career?

Oh, 100%. As a fighter, you can’t really rely on a team like you do in football or basketball. In football or basketball, you have a bunch of guys trying to achieve the ultimate goal—to win. As a fighter and an actor, you’re an entertainer. You have to come prepared. You have to have your stamina, your combinations, and your focus up. When you’re working opposite certain actors, they’re also bringing their A+ game—especially on Ray Donovan. You’re making amazing scenes. And you can’t have an amazing scene if one person isn’t bringing it all. Being a fighter got me ready for these moments.

In boxing there’s a lot of putting your guard up. Acting is the opposite in that you have to let your guard down. Was is difficult for you at all to access your vulnerability given the realities of being an athlete?

You know, you can let your guard down and let go. But your focus and presence—being present—is the same as being a fighter or a star player on a team. You have to be willing to let go and allow yourself to trust the work. That’s usually what people like to see: someone who lets go but trusts the work and trusts themselves. That’s where the writing comes in and the preparation you do for a role. You go in there and you let your guard down, but you stay focused because you have to be able to adapt. You never know what that other actor is going to do. I’ve learned so much from Liev [Schreiber] and Jon [Voight].

You have to stay on your toes.

Oh my gosh you have to, especially with those guys. They are two of the best in Hollywood. I love working with them and training with them.

Pooch Hall in the season 5 finale of Ray Donovan, airing Sunday at 9PM ET/PT on SHOWTIME

What are some qualities within yourself that you recognize for leading you to success?

Growing up as a fighter. You can’t achieve shit if you don’t work. You’ve gotta want it. It has to be in your heart, too. You can’t just talk about it. We’re surrounded by so many people who talk. I always had that [drive to do things] within me. Where would I be if I hadn’t put in the work? Where would I be if I just settled? I thank my parents first and foremost. I thank God and I thank my parents for giving me the strength. I thank my dad for putting me in the ring. It gave me a sense of discipline. I learned how to take direction and how to be coached. It gave me a purpose. A lot of kids now don’t have a purpose. People are aimless: “I don’t know what I want to do with my life. Life sucks.” I thank my father for being in my corner and making sure I didn’t get jaded or side tracked.

Have fun. First and foremost, have fun. Listen. You’ve got to be able to listen. You cannot make it if you don’t listen. What I mean by that is you have to listen to direction and you have to listen to what’s behind the words. There’s a lot of subtext sometimes. Also, realize that it’s show business. They might not always hire the best actor. They might go with someone who has the most followers. That’s life. That doesn’t define you. That doesn’t make you a good actor. If you’re looking for to be famous, you can go make a video on YouTube. But as far as recognizing the art behind acting, you can’t let fear dictate how you behave. Fear messes a lot of people up. That’s a balance you have to find as a human being. I know a lot of people who are like, “Shoulda, woulda, coulda.” As long as you’re happy and fine, that light shines through. ♦

This interview has been edited for length and clarity.