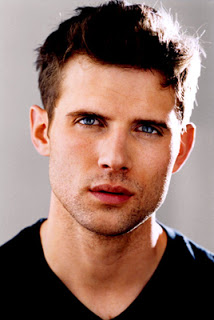 Fiyero in Wicked may not have a brain, but the actor playing him on Broadway sure DOES! This Missouri State University alum is currently playing the charming slacker Shiz University student, Fiyero, over at the Gershwin theatre. Kyle Dean Massey also appeared in Next to Normal, a few years ago, where he gave a chilling performance as Gabe. Read this interview with Kyle Dean to learn from his knowledge about things like, keeping a show fresh to even playing a ghost!

KDM: The short answer is High School. In 10th grade I did my first play, It’s a Wonderful Life, and that was what really sucked me in. Also, when I was a little boy I had seen my sister in The Nutcracker so that’s kind of what got me into dancing and music, but the actual theater thing wasn’t until High School.

You started taking dance classes at the young age of six. Was it then when you realized your love for performing?

What made you decide to audition for your school’s musical during you sophomore year?

I was really big in choir in Junior High and so it was kind of just the next step. It was a joint effort between the choral program and the theater program in my High School and I loved both of them so it only made sense to do that… I was really looking forward to doing that so that’s why I auditioned.

Can you describe what it was like to perform in your first musical? From that moment on did you realize that theater was your calling?

You have a BFA from Missouri State University. Would you mind describing your time there and how the program helped you become the successful actor you are today?

It was just like any other musical BFA program I think. The curriculum is pretty similar. You go and you basically double major in voice and theater and then you have a minor in dance, It was like a liberal arts degree so I had other general education classes which I really enjoyed. I did not want to go to a conservatory, I wanted to go and learn about other things as well.

It was great. I was kind of a mess. I had all these disparate  elements of what it was to be a musical theater performer but none of them really went together well and at Missouri State, which they no longer do, is they used to accept students and then after a year of being in the “program” is when you actually audition to be in the BFA program. That was good for somebody like me because other schools weren’t accepting me because I didn’t have great training before college, so I kind of learned a lot in college.

I have to say, I have so many questions for you about Next to Normal but I will do my best to condense them. First off, I am truly in awe of how one would go about playing Gabe. How did you manage to portray a deep connection with your fellow cast mates on stage, was it completely one sided? Until the end you really only interact directly with Diana.

The thing is for me is that I can only play that role as if I was really there. I didn’t really think of myself as a ghost and so those people might not have known me intimately, but I had to at least be real to myself and treat them like I normally would a sister, and a mother, and a dad. I did only interact directly with Diana, although I feel like I interacted with everyone honestly.

As an actor what is it like to experience a cast change? How do you have to alter your performances?

I enjoy cast changes because it shakes things up and it makes you do different things. Performances are interactive and they’re reactive so you can’t continue to have the same reactive response to something that’s no longer there, so it’s fun.

You know, in Wicked we have cast changes constantly; I mean I’ve probably done the show with 20-30 different Elphabas and Glindas each… like 60 total. I’m so used to that now.

In Next to Normal though, Diana was a big change. There’s a line in “I’m Alive” which is the first line and it’s, “I’m what you want me to be” and that’s what I was, I was exactly what Diana wanted me to be so Alice [Ripley] wanted me to be something different then what Marian [Mazzie] wanted me to be. So, my performance was quite different with the two of them; also the dads. I would say most of them were quite similar except for Brian Darcy James. A lot of the guys had played Dan like he had been beaten down by the illness, like he was exhausted and tired and at his wits end and they had this world weary take on the role. Brian was the opposite. He was fighting still… a lot, and he was very… not aggressive… I guess aggressive. It changed things because it made everything a bit of a fight when Brian was the dad and with the other dads I could kind of swoop in and take charge of things. It made my character a bit more cocky whereas with Brian I really had to fight for things and I didn’t feel quite so sure of myself with him. So, it was cool, it was great. All the different ways were terrific.

Everyone involved with Next to Normal was so talented. What did you learn from working with such skillful people?

A million things. I don’t know if I can sum it up into one thing. You learn things from all people you work with. In that show in particular, I developed a certain sense of focus that I had never gotten the chance to develop with other shows. You had to be just so, so completely present in that show otherwise Alice Ripley would just flatten you onstage. The bar was raised and you had to meet people there.

Your first experience with Wicked was in 2007 when you joined the tour as part of the ensemble and Fiyero understudy. How did that job come about?

I auditioned for it [Kyle laughs]. I had been in for the show maybe once before and it kind of looked like I was going to get an offer but then I got the offer to star in Alter Boys and I took that instead and then after doing Alter Boys for a year, a role in Wicked opened up again and I took it.

Since 2007 you have been continually been reprising your role as Fiyero. What keeps you going back to the show?

It’s a great job, that’s why I keep going back to it. And it’s such a great family. At Wicked the people have been working in and out of it for years and years. It’s great to go back to a place that’s familiar and feels like family and everyone there just treats us so well. And the show is good! I like being in a show that audiences like and that people like. They’re always there and excited to see it. I’ve been in some shows where the show begins and there’s like nobody out in the audience or like very few people and they’re not terribly enthusiastic. It makes it hard to do the show for those people night after night. [At] Wicked we don’t have that problem. We have terrific crowds and a great cast and company so that’s why we keep going back.

How do you keep the show fresh? I mean not only are you in the show eight times a week, but this is also your third or fourth run, right?

Yeah it is. It’s beyond my forefront for sure [Kyle laughs]. Well, little breaks help. I was twenty-five years old when I started understudying Fiyero and I think six years later I feel like a bit of a different person. Also, like we said, cast changes help, moving around from different companies. I’ve done the tour, I’ve done Broadway, and I’ve done the tour, I’ve done Broadway and that definitely keeps it fresh. On the tour, you know, you’re moving cities. When you move cities, cities respond differently to the show, so that makes a difference.

All you can do to keep the show fresh, really, is to stay in the moment and try to be present and all of those things. I think that’s what makes things stale, is when you hear the term “phoning it in” and just kind of going through the motions. If you’re really listening and you’re really doing your job then you can’t “phone it in” you’ll automatically continue to be fresh… at least one hopes [Kyle laughs].

What’s your favorite part about being a part of a cult show?

And people will be like, “Oh yeah, I’ve heard of that.”

It’s nice because so many times you have to be like, “Oh yeah, I’m in this show and it’s about ‘this and this’.” And you have to go into great detail to explain what you do because not everyone is a fan of Broadway… not everyone knows what Broadway shows are, so with Wicked, at least people have some sort of recognition there and that’s what’s nice about it.

You are also a master class teacher. What do you enjoy about working directly with students who wish to be Broadway stars like you?

I guess what I enjoy most is finding those kids that are just incredible! I get really excited to see really young, amazing talent. In ten years there are going to be some seriously amazing people on Broadway. I like it when you see someone who’s young and so good and you can give them a little help here and there and you can see them get even better. That’s exciting to me, that’s fulfilling and I really like doing that… among other things. I really really enjoy teaching a lot.

I don’t really have a pre-show routine. It’s always different. Sometimes I go straight to my dressing room and sometimes I hang around the theater. I don’t really start getting ready until after the show’s even started and even that’s really fast. People come in and put my mic in and throw my clothes on and I go out there and do it.

What advice do you have for aspiring young performers?

Get good training and get a gym membership, that’s my best advice. I am terrible at advice [Kyle laughs]!

Once. I loved it.

Do you have a dream role?

No. I really would like to play something new that I can create myself. That would be the dream, to kind of find that role that really works for you, that you kind of help develop. That’s really the dream I think.♦